A loving marriage lasting over six decades is as awe-inspiring as a star-filled night sky. I never grew tired of hearing my parents talk about how they met. Each detail was infused with love that put a twinkle in their eyes as they grew older.

It was springtime in Milwaukee when the city began to thaw and patio furniture came out of hibernation. Locals, excited for warmer temperatures, bid their parkas farewell and reached for shorts and sandals. It did not matter if the weather was only in the fifties; it was still much warmer than living through winter’s aggression. World War II had already begun. The atmosphere was unsettling.

The writing of my parents’ story would not have transpired without Dad’s friend, George. Dad was in the U.S. Army Air Force at the time but home on a 3-day pass. He happened to visit George at work one day at the bank, and walking into the bank’s entry, he noticed a beautiful gal with gorgeous legs sitting behind a desk. He was captivated.

George managed to talk Mom into a blind date with Dad, but the condition was for George and his girlfriend to join in. And so, a double date was set. The beautiful young woman with the nice legs was nineteen and the handsome young gentleman was twenty-one when they met on June 29, 1941. The two couples enjoyed good conversation, laughter, dinner at Wegerman’s Resort at Pewaukee Lake, and dancing to the tunes of Tommy Dorsey and Glen Miller. This evening proved to be the spark that ignited my parent’s love for each other.

Do you believe in love at first sight? They did. Early the following year, Dad was informed that his squadron was to be dispatched to the European Theater. This news and the fact that he was in love with Mom complicated matters. He did not want to lose her, so he proposed, hoping with all his heart her answer would be yes. Her feelings matched his, but she declined Dad’s proposal because of the imminent uncertainty. Mom had never been impulsive, so had she left the decision up to her heart, she would have married him immediately. Dad was disappointed but respected her wishes. However, I should tell you that persistence turned into his new middle name.

Some time passed and while they were out for dinner one night, Dad asked Mom to marry him again. He felt a second try was worthwhile because she was the only woman who held his heart. In the restaurant, they sat on red velvet chairs and their table was dressed in a silky white tablecloth. Twinkle lights glistened above as Dad proposed in the glow of the soft-lit candle on their table. Restaurant patrons nearby witnessed this occasion, clapping when they heard her say, “Yes!” Mom offered her left hand as Dad slipped the solitaire on her ring finger. Its sparkle matched the tears of joy in her eyes. She loved him without a doubt and realized life will always be full of unknowns.

Dad was then stationed overseas for three years – a long time for them to be apart. They stayed in touch by old-fashioned letter writing, which enabled them to learn more about each other and grow closer while separated by an ocean and war. I imagine them holding the precious envelope to their cheek as though it was the cheek of their beloved. They professed their love as their letters flew back and forth among the cotton ball clouds in the sky, befitting as the glue in their long-distance relationship.

The year was 1945 and the weather was frosty in early February. Dad was fortunate to return to America on a “rotation plan,” meaning thirty days at home then returning to Italy. After taking a quick two weeks to plan their wedding, the aisle of the church sanctuary gracefully carried Mom towards her future husband on February 24th as he waited at the altar. She wore an ivory satin wedding gown that cost $39.95 and she looked as elegant and classy as Rita Hayworth. Dad looked handsome as ever in his Air Force Uniform. Following their honeymoon in Chicago at The Edgewater Beach Hotel on Lake Michigan, he returned to Europe and the ink on the stationery kept the fires burning until he was honorably discharged in September.

Over the years, their faces lit up when they told of those early memories. Their romance, love, and excitement danced in every sentence. Now that they have both passed, I miss the story-telling. I miss the animation in Dad’s voice and facial expressions, how Mom filled in the gaps where Dad left blank spaces, or how she fine-tuned his recollections. Their marriage was not devoid of struggles, but it was one of commitment and everlasting love. They were “attached at the hip.” He was her best friend and she was his.

As Dad once said, “That blind date blossomed into sixty-seven years of marriage, three lovely daughters, seven grandchildren, and thirteen great-grandchildren. So, I am very grateful to my friend, George!” To fall in love on a blind date, to hug good-bye in distressing war times, to stay in touch through handwritten letters, and to share seventy years is my parents’ story. Dad is not around to tell their tale anymore, nor is Mom to chime in when she should, but the memories stay vivid and their story is ageless. What a journey they traveled together through rainbows and rainstorms. 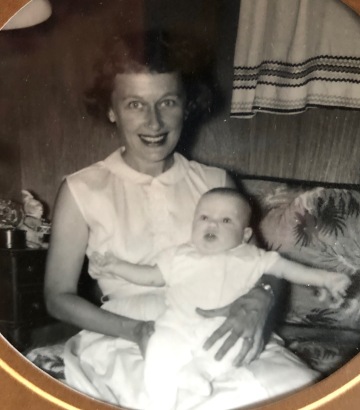 Mom and guess who?

My family…
I have older sisters who are almost two years apart.
Then I came ten years later. 🙂

I hope you enjoyed my parent’s love story. ❤

Thank you for sharing. 💗

59 thoughts on “Letters in the Sky”

I appreciate your thoughts! Cancel reply

Welcome! Please visit my 'About Me' page to learn the inspiration for this blog. Thanks for stopping by!